Jenan Moussa:
I think there are more tweets about #Gaza in these last couple of days than there were about #Syria war in last 3 yrs. #justsaying. (TW: 12 luglio 2014) 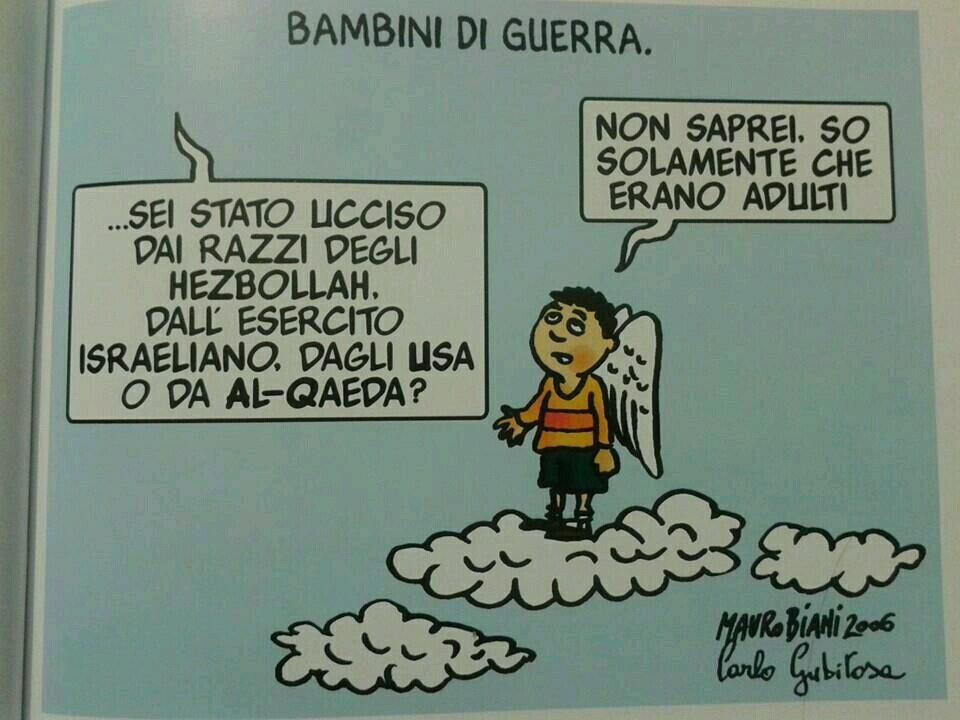 Dan Rabinowitz (immagina un ipotetico discorso del primo ministro israeliano dopo un auspicabile cessate il fuoco unilaterale):
If Israel had a prime minister who was wise and courageous, that prime minister would get up in front of the global media and issue the following statement: “This is the seventh day of Operation Protective Edge, which was forced upon Israel when Hamas began firing rockets at our population centers. […] This morning, I ordered the army to cease attacking Gaza, unilaterally, from 12 noon today. […] I have decided to cease fire for two reasons. One has to do with worldwide public opinion: a cease-fire from our side, which not for a moment do I delude myself will be answered with a similar act from Hamas, will demonstrate Hamas’ murderous nature to the entire world, and its leaders’ tendency to use violence in every situation. […] The second and more important reason is the need to begin a historic intra-Palestinian dialogue that could provide the entire Palestinian people, and other Middle Eastern countries, with a lifeline” […]. (“Haaretz“, 15 luglio 2014. L’autore insegna presso il Dipartimento di Sociologia e Antropologia dell’Università di Tel Aviv)

Hannah Weisfeld:
«As small a gesture as that might seem, hope is not an easy thing to hold onto when the rhetoric and actions surrounding you are filled with such extremes, with people retreating back to the deepest, darkest part of their tribal identities, expressing only the perspectives closest to their “side” of the conflict. On Tuesday evening, the discussion turned for some time to the unsightly social media “war” that many of those fasting have borne witness to over the past month. There was a level of shock at the total lack of compassion and empathy, or perhaps even worse, the total unchecked racism that this battleground seems to engender – on all sides» (“Haaretz“, 17 luglio 2014)

Noa:
My heart goes out to the families of the victims wherever they are. I am happy to have a strong Israeli Army to defend me against the those who clearly state their aim is to slit my children’s throats…BUT..i do not want to use my sorrow and fear as a shield against human empathy and clear thinking. On the contrary, I want to do the opposite.
I want to stand in the middle of the rink, and speak my truth.
There are only two sides, and they are not Israelis and Palestinians, Jews and Arabs. They are moderates and the extremists. I belong to the moderates, wherever they are. They are my camp. And this camp needs to unite!! I have nothing whatsoever in common with the Jewish extremists who burn children alive, who poison wells and uproot trees, who throw stones at school children, who are motivated by brainwashed hate and acute self-righteousness. […]
Just as I urge the Arab moderates wherever they are to do everything in their power to shun extremism, I have no intention of blinding my eyes to the responsibility that must be taken by my side for the fiasco that is now occurring. Radical Islam is a dangerous phenomenon that must be dealt with not only by Israel, but by the entire world. But there are in the Muslim world more liberal voices, there are partners for dialogue! Have we done everything in our power to reach out to them?
The answer is NO, on the contrary. […]
There is no plan, there is no vision that is morally compatible with universal values, intent on procuring co-existence: or at least none that is being articulated coherently to our people. In its place, we are being fed constant fear and paranoia, fanning the flames of nationalism, cultivating xenophobia and racism. De facto, these policies are deteriorating Israel to an ideological and strategic point of no return.
Only dialogue from a place of respect and empathy can save us. Only a concerted effort to strengthen the moderates and thus marginalize, as much as possible, the radicals, can afford us some hope. […]
I ask myself, and Netanyahu: why don’t we surprise ourselves! Netanyuahu, you are known to be a clever man: why not go 180 degrees, change the rules of the game, think out of the box? […]
If we refuse to recognize each other’s rights and embrace our obligations, if we continue to each cling to his own narrative with contempt and disregard for that of the other, if we again and again choose swords over words, if we sanctify land and not the lives of our children, we shall soon be forced to truly seek a colony on the moon, for our land will be so drenched in blood and so cluttered with tomb stones there will be nothing left for the living.
(Blog “Noa the singer“, 22 luglio 2014)
(La traduzione in italiano è sul “CorSera”, 25-07-2014)